Residents have condemned Labour’s latest savage cut which could see the removal of thousands of bins from Newcastle. They are pressing ahead with the roll out of the controversial communal bins across the city.

In areas where they have been introduced, residents have complained that the communal bins are filled within days of the collection which has resulted in a massive increase in litter and fly tipping.

Local campaigner Olga Shorton said: “Residents across the city are fearful of having this scheme introduced as it is proven not to work. Anyone with a back lane is likely to have a communal bin introduced in their area soon.

“Bin collections are the most visible council service for many local residents. If residents are being provided with a shared bin, maybe they should be given a discount on council tax.”

Party Leader Jason Smith said: “Communal bins were introduced to overcome the chaos caused by Labour's tinkering with the bin collections. The communal bins are just not fit for purpose as their introduction has resulted in substantial amounts of rubbish in back lanes.

“We are calling on senior Labour councillors to stop the roll out immediately.” 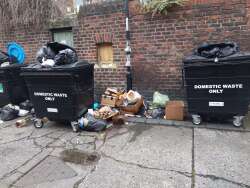 Resident of Arthur's Hill reported this on fixmystreet.com on Thursday 20 July 2017. The photo (left) was taken after they had received an email from the council confirming that the rubbish had been cleared. 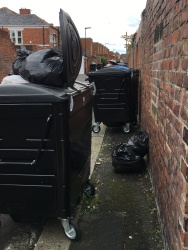 Another resident in Heaton complained on fixmystreet.com on Sunday 21 May 2017 that the communal bin was not secure and could injure someone.

A resident of Arthur's Hill reported on 24 April 2017 that the bins were overflowing and as a result rubbish bags were being dumped, as well as being impossible for cars to pass.

Residents have also reported an increase in fly tipping since the communal bins were introduced.

This site uses Akismet to reduce spam. Learn how your comment data is processed.

Find out what is happening in your area.

Our website uses a small number of  cookies to help us to understand our audience and give you a secure experience.

Agree by clicking the 'Accept' button or 'X'.